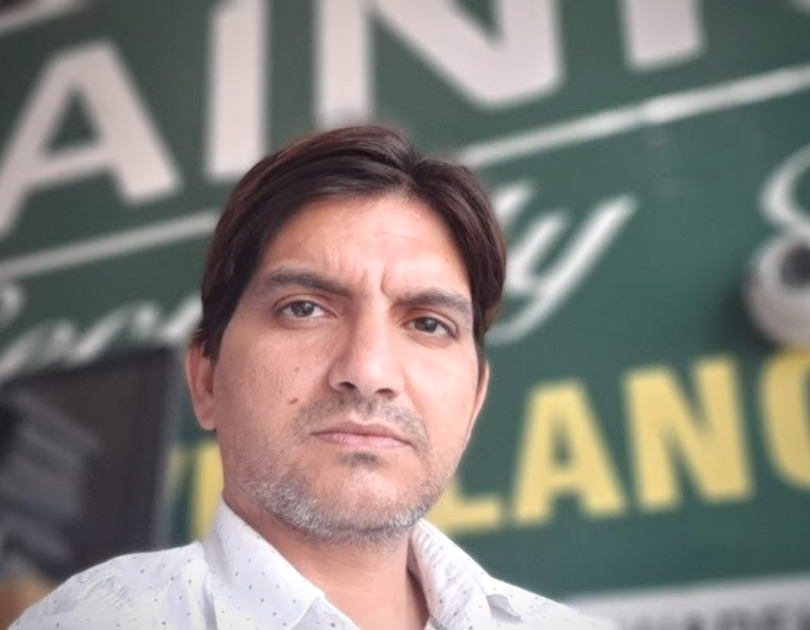 Dupesh was born in a small village of Jammu and Kashmir to a humble family. His father was in the army and posted in the Kashmir region. He completed his schooling from the Army School in Jammu and migrated to West Bengal to pursue his undergraduate studies from NIT Durgapur. During his time in Jammu, he had limited exposure. There was a paradigm shift in his lifestyle during his college days in Durgapur. The exposure level was high, and he interacted with students from across the country. He also met students and experts who visited his college from overseas for research. He gradually evolved as a student and focused on interactions that shaped his personality and understanding. He dynamically contributed to various projects for the upliftment of the students and was elected as the President of the Electrical Engineering Association. Despite coming from a small town, he never backed out. He gradually experienced and learned that every task at hand should be concluded with logic.

He was recruited as an Export Sales Engineer in Aditya Birla Group from his college campus. He had multiple career options streamlined, but he chose to proceed in the manufacturing sector. His employer was in a joint venture with a Japanese company in Mumbai. Hence, he reported to two officials, and one of them was Japanese. Dupesh knew that the key to attaining success was in understanding the logic, and he asked tons of questions to his colleagues and boss. Most of his colleagues refrained from answering and asked him to focus on the allotted work. His Japanese boss came to his rescue and emphasized on improvising his writing and reading skills in English. He also suggested working on his math skills and to learn computer. His Indian boss guided and taught him to draft professional letters for tenders. As soon as he felt that he lacked any of the skills, he would undergo training and update himself. Gradually he has mastered all the skills which were not possible without the persistence and thirst for knowledge.

During his time in Mumbai, Dupesh realized the scope of CCTV surveillance business. He carried out extensive market research and learned the in-and-out of the business. Even after thorough research, he could not find any significant opportunity in Mumbai. He could easily manage to grab a volume-based business in Mumbai, but the kind of value he was looking for was missing. Soon, he gave up the job and returned to Jammu. He knew the scopes of CCTV surveillance in his home state and decided to start from there. He visited institutes and organizations that were looking for automated surveillance systems. This helped him map out the exact requirements of the clients in that region. He soon developed an assembly plan and installation process that was lacking in the market during those times. His company took up the initiative to train the concerned clients regarding the systematic method of using the product and service. 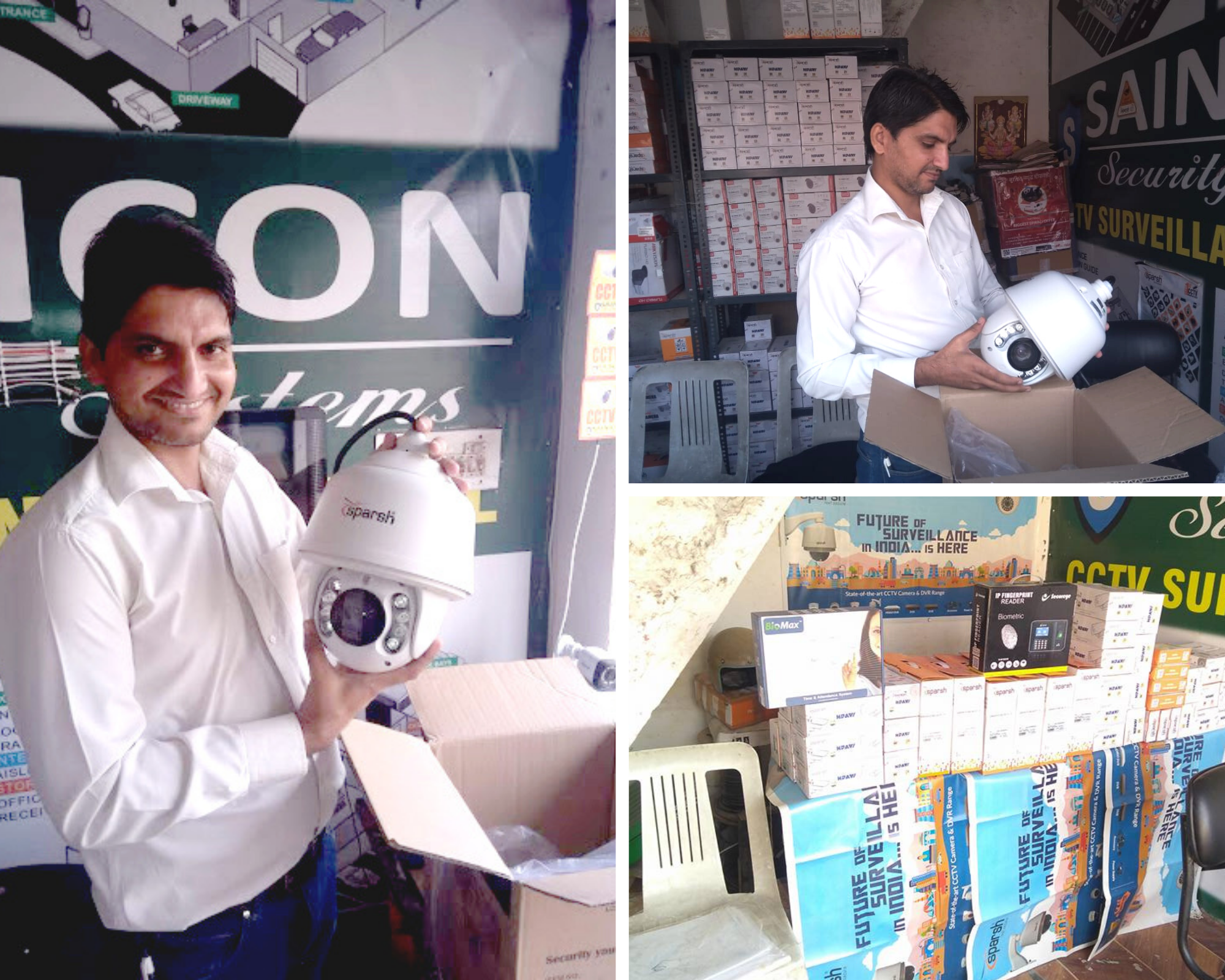 Leaving a full-time job for pursuing an entrepreneurial journey sounds simple and sensible enough, but it is always difficult. In the initial days, it was extremely tough to convince organizations to avail of their services. Clients did not feel the need for the same. This made his journey tough. Dupesh didn’t know what to do with life when he was in college. He often used to meet retired individuals there. He listened to their tales of missing out a prominent opportunity in life, just because they did not take the risk. He did not want to live a life like that. This always motivated him. No matter how hard the circumstances in terms of survival, grabbing an order, or finance, he resolved all of them.

Glimpse into his successful life

Sainicon Security Systems www.sainicon.com started its journey in 2012 and has become one of the most successful companies in the Jammu and Kashmir region. The firm is in compliance with all the necessary fire and safety guidelines. They also hire consultants for accurate guidance in government projects. They dynamically promote and market their products through all modern marketing channels, including social media. They have successfully installed CCTV surveillance in the border area for the defense forces. It is due to such projects the monitoring of activities has strengthened. With persistence efforts, they could convert all the potential leads who initially denied the requirements of CCTV surveillance in their organization or campus. They manufacture CCTV’s, and other necessary products are purchased and assembled by them. In lieu of strong competition in the industry, they constantly keep themselves updated in the market, to offer quality products at competitive pricing. They also have a service team to fix errors and malfunction. They consult, design, manufacture, maintain, and upgrade their products. Depending upon the requirements, all other necessary parameters are either established or outsourced from trusted firms. The major clients and projects of the company are from the Defense sector, Government offices, Domestic purpose, and Corporate.

Dupesh’s advice to anyone who wants to follow his path

Learn interpersonal skills and develop the art of conversation. Be persistent, work hard, and you will achieve the desired results. No one can follow the same path but never give up on your choices. Celebrate small things, get inspired from them and don’t wait for something big to happen. Unless you are happy in the work that you do, don’t stop. Don’t just spend, but also focus on savings. All days are not good and you must be prepared for unexpected troubles.
“Don’t be satisfied, push yourself.” 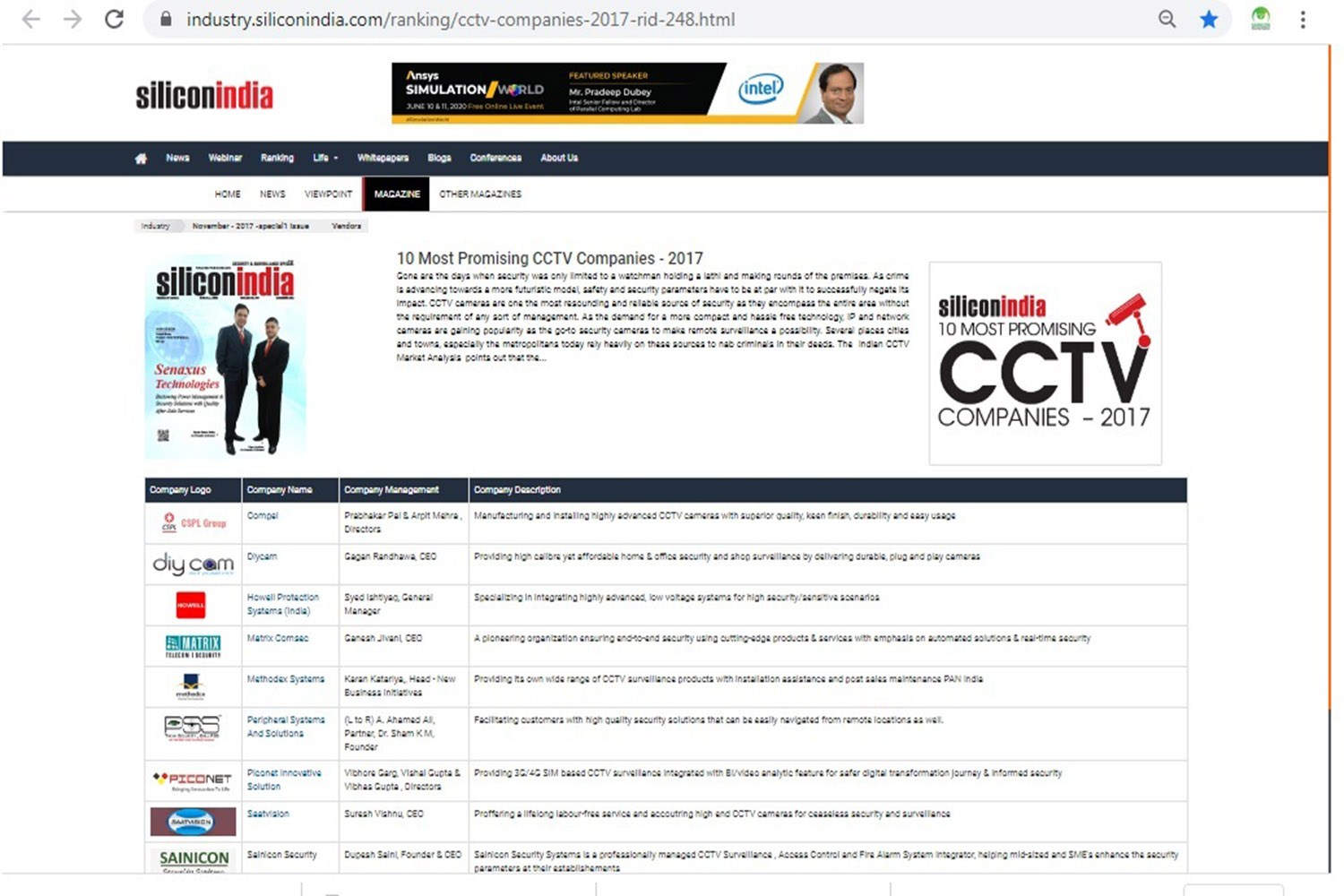 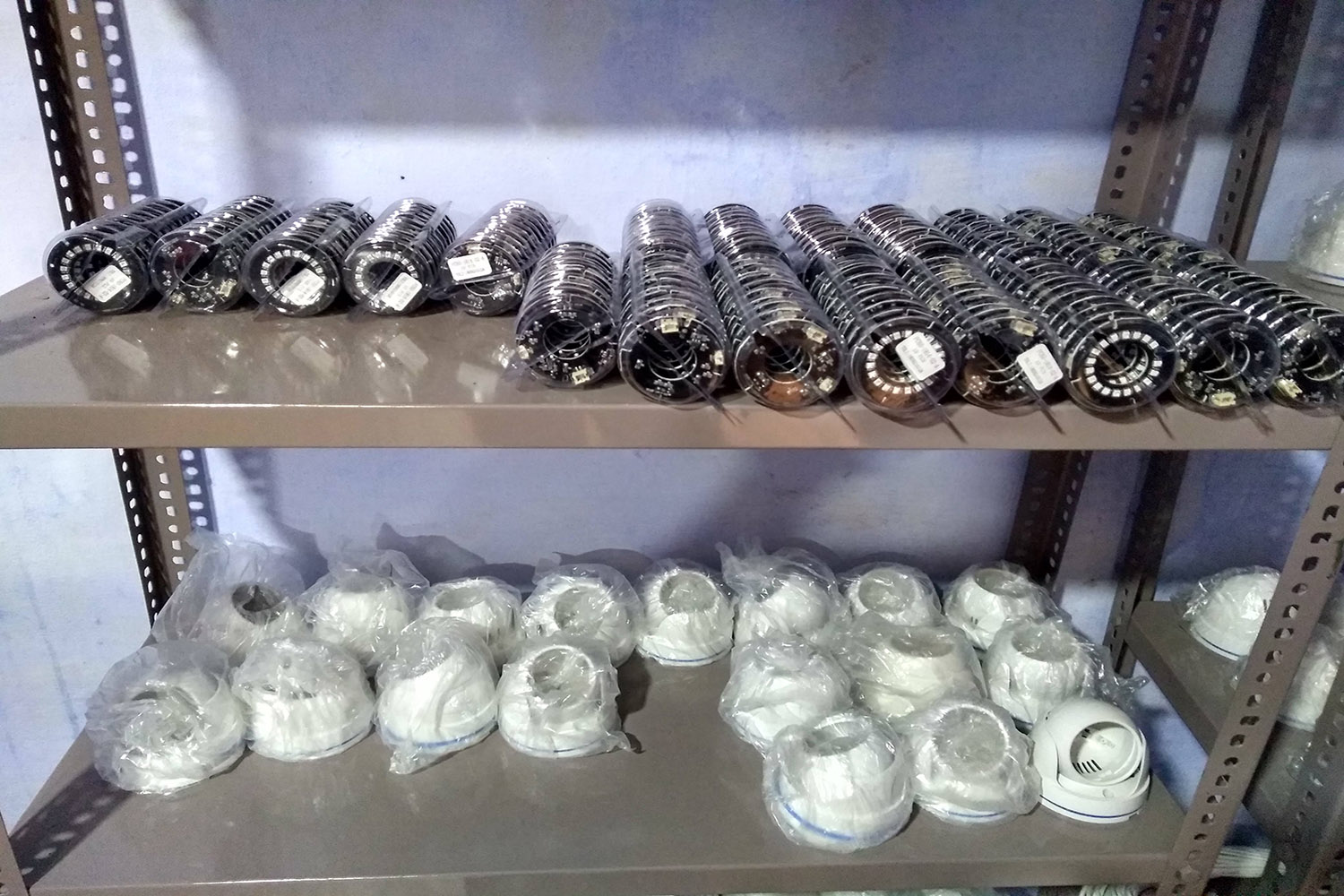 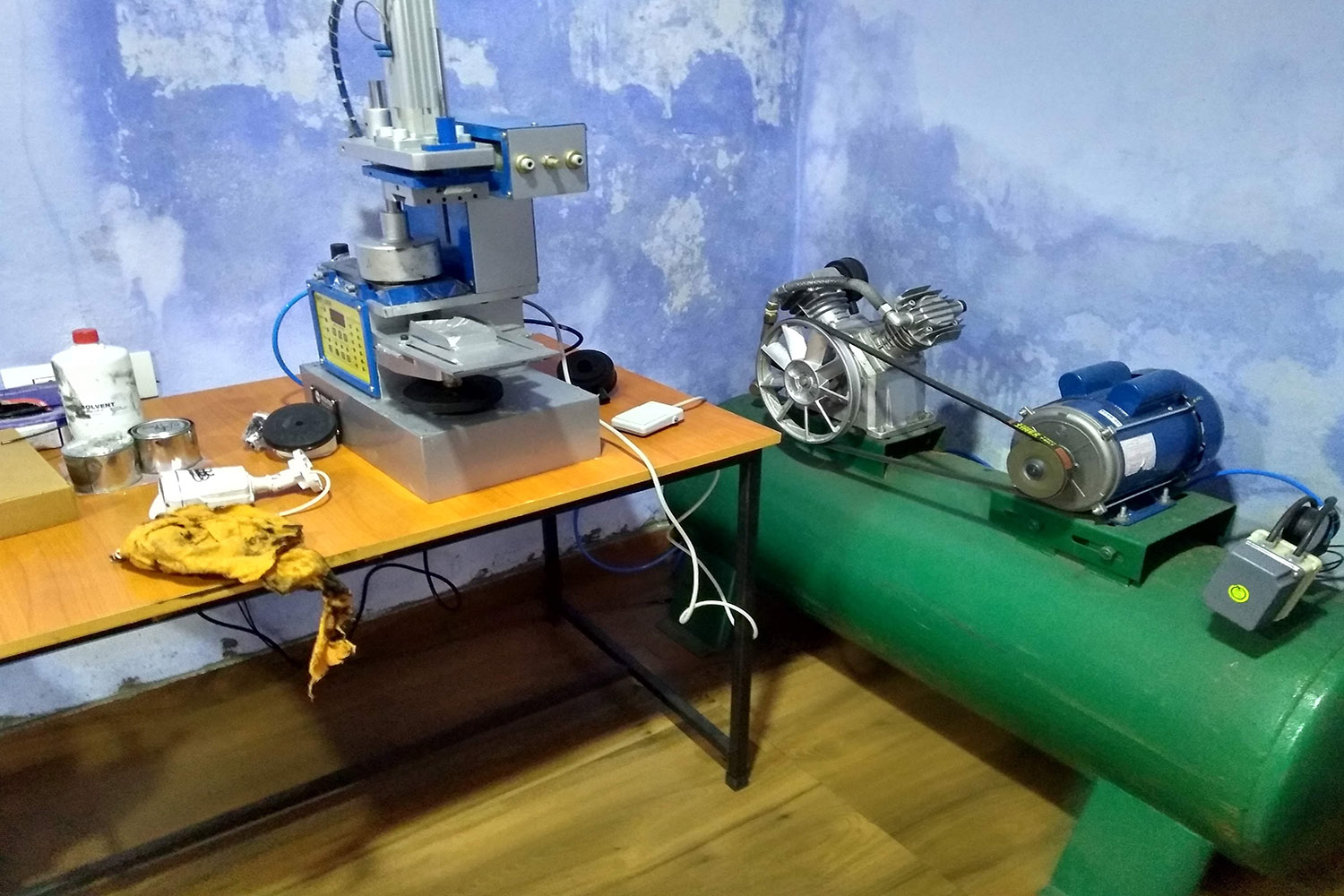 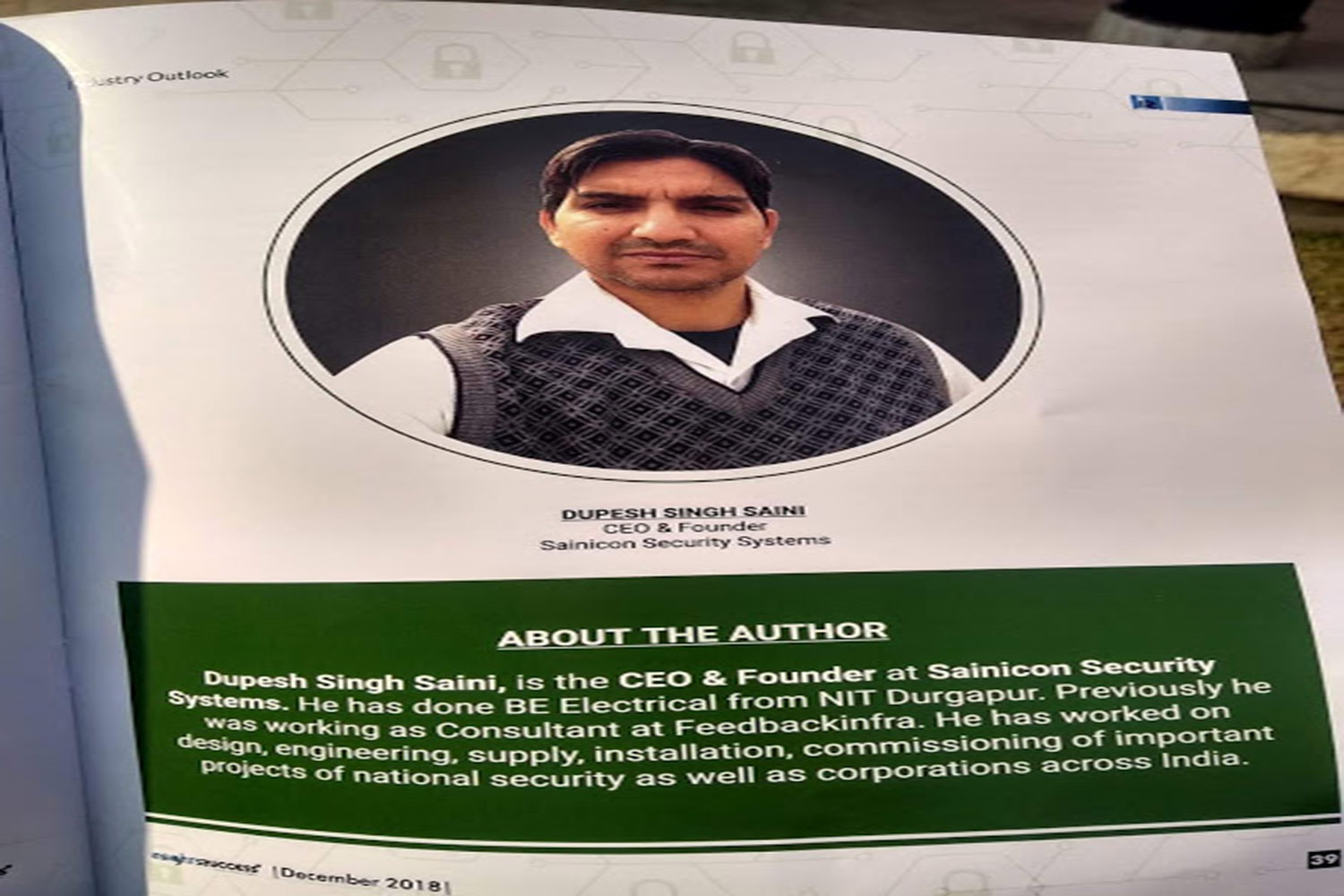