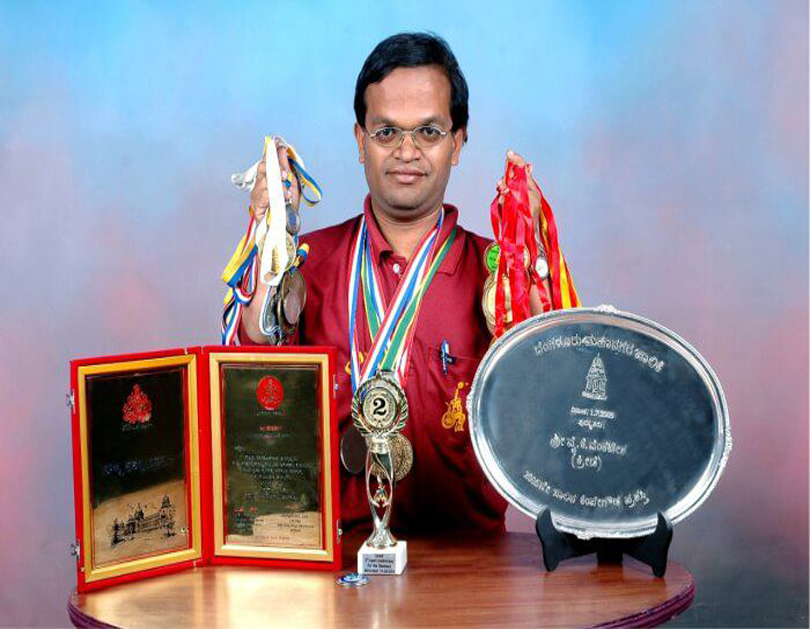 Turn your obstacles into opportunities and your problems into possibilities -is what KY Venkatesh, a para athlete warrior and Padma Shri awardee, is all about. Meet 51- year-old para sportsman, a Limca book of records holder and the most recent Padma Shri award holder. KY Venkatesh was born with achondroplasia, a condition that leads to dwarfism but he did not let his disability come in the way of achieving his dream to carve his niche in the field of sports. Read on to know the heartwarming story about this 4 feet 2-inch warrior who stood tall amongst the greatest sportsmen in many international sports arenas.

KY Venkatesh is a big name in the field of para-sports as he has represented the country in many world-level championships and won many accolades. Venkatesh started his sporting journey way back in 1994, where he was part of the first International Paralympic Committee (IPC) Athletics World Championships held in Berlin, Germany. Though he did not win any medal in that event, it gave him the much-needed impetus to carry on. Thereafter, he took part in multiple games and attained excellence in basketball, badminton, athletics, hockey, soccer, and volleyball. In 1999, he represented the country in a multi disability championship held in Australia and won his first international gold medal for shot put. In 2005, he became the first Indian athlete to be part of the Fourth World Dwarf Games and won six medals for athletics and badminton. For almost two decades he represented Karnataka and India at different national and international events and won many laurels. He got a silver medal for badminton at the LG World Cup 2002. He won three gold and two silver medals at the Open Track and Field Championship 2004. Venkatesh also did well in European Open Championships 2006. He won a gold medal in the hockey event, silver medals in football and basketball as well as a bronze medal in badminton. The latest feather in his cap was being awarded the most revered Padma Shri Award in 2021. Speaking about it, Venkatesh says, “I didn’t expect this award since this time I had not even applied for it. However, the committee recognized my achievements and announced the list. When I got a call, I was not sure and kept checking and confirming. To my delight, I did get the award. I am honoured to be awarded this feat. It is a culmination of all my effort and hard work over two decades.”

Life before awards and recognition

Born with achondroplasia-induced dwarfism, Venkatesh’s growth was stunted to 4”2’. However, he did not let this come in the way of his dreams. Venkatesh reminisces, “As a child, I would play chess with my father who coached me to ace the game. It was a constructive way to spend my time and overcome my destructive and naughty nature. I was good at academics and pursued a Diploma. However, my heart was in sports, and one incident changed my life.”

Venkatesh was always interested in volleyball, throwball and badminton but did not imagine himself being in the sporting arena. However, one day he found out about CN Janaki. She suffered from polio when she was two years old. However, in 1992, she set a record of being the first physically challenged person to cross the English Channel.
Venkatesh said, “I thought if someone like her who did not have any sensation in her legs could attain such a huge feat, why can’t I? So with complete dedication and steely determination, I started to concentrate on sports.” His parents and friends were supportive of his decision and backed him in every way possible. His first event was Mysuru in 1993 and, as they say, the rest is history.

Though Venkatesh has got a lot of success and admiration for his work in the sports field, life has not been fair and easy for him. One of the first and the main hurdles he faced was getting financial aid for representing India at the global arena.
Venkatesh remembers, “We were not getting any government funds because our federation was not recognised. So we had to arrange for our air ticket, boarding, and lodging. Since I was not from an affluent background, I could not afford an international trip. I had to approach sponsors for the same. Thankfully, I did find Dr Jeevaraj Alva, who funded my trip and Dr M P Ganesh who encouraged me” In addition to the funding issues, there were many other challenges Venkatesh and his colleagues had to face. One of them was getting a visa for the multi disability championship held in Australia. He recollects, “ We had an invitation letter for the sporting event and the requisite tickets and finances, but we were not issued a visa. We had to go to Delhi to the Australian Commission and sign a bond paper stating that we have a property in Bengaluru and will return to India after the event. That is how we got our visa. This was the first event where I won the gold medal for the country.”

Routine as a sportsman

Being a sportsman is not easy. It requires immense determination and discipline with a strict training routine. Venkatesh followed his training routine strictly daily, including two hours in the day and three hours in the evening. On the days he would feel low and lazy, his coach and Janaki would motivate and push him to carry on. Food and nutrition also play a critical role in an athlete’s life.
Venkatesh adds, “I am a pure vegetarian and non-alcoholic. I believe you need to have all vegetables, grains and spinach in your diet and stay away from oily and junk food. Also, it is best to stray away from drugs for enhanced strength and endurance.” Besides these, a positive attitude and regularity in training are the two key ingredients for a successful sporting life.

Venkatesh believes that always count your ability, not the disability. This will give the impetus to attain greater heights. Besides having an optimistic attitude, it is essential to look forward and take one day at a time. To Venkatesh, success means “Finish your target and cross all the hurdles and you are sure to succeed.” Today, Venkatesh has retired from professional sports, but he continues to contribute towards the field of sports. He is the secretary of the Karnataka Para-Badminton Association, which conducts the national tournament in Bengaluru every year. People like Venkatesh give all those with physical ailments a ray of hope to fulfil their heart’s desires and not let anything deter them from their goals. 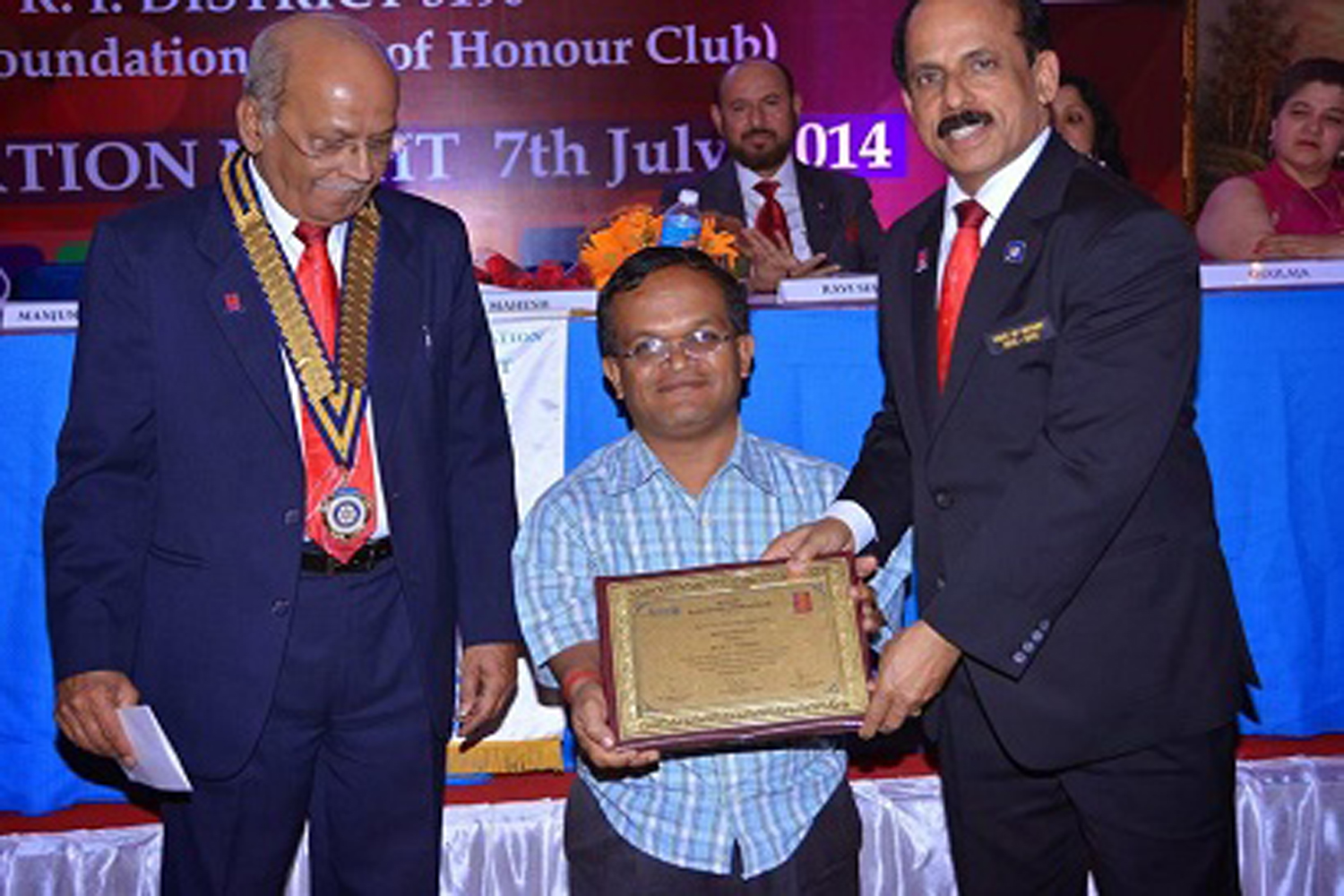 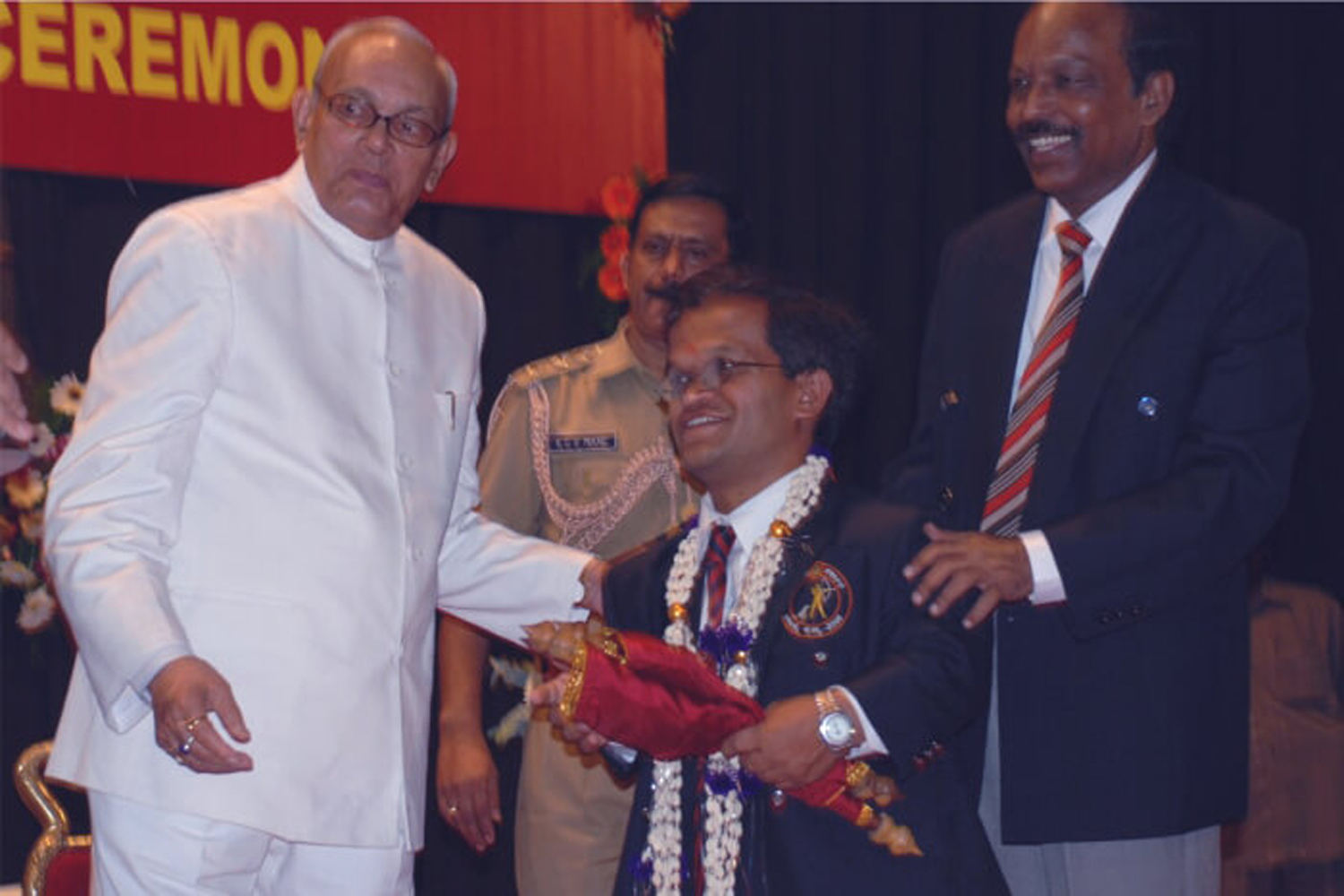 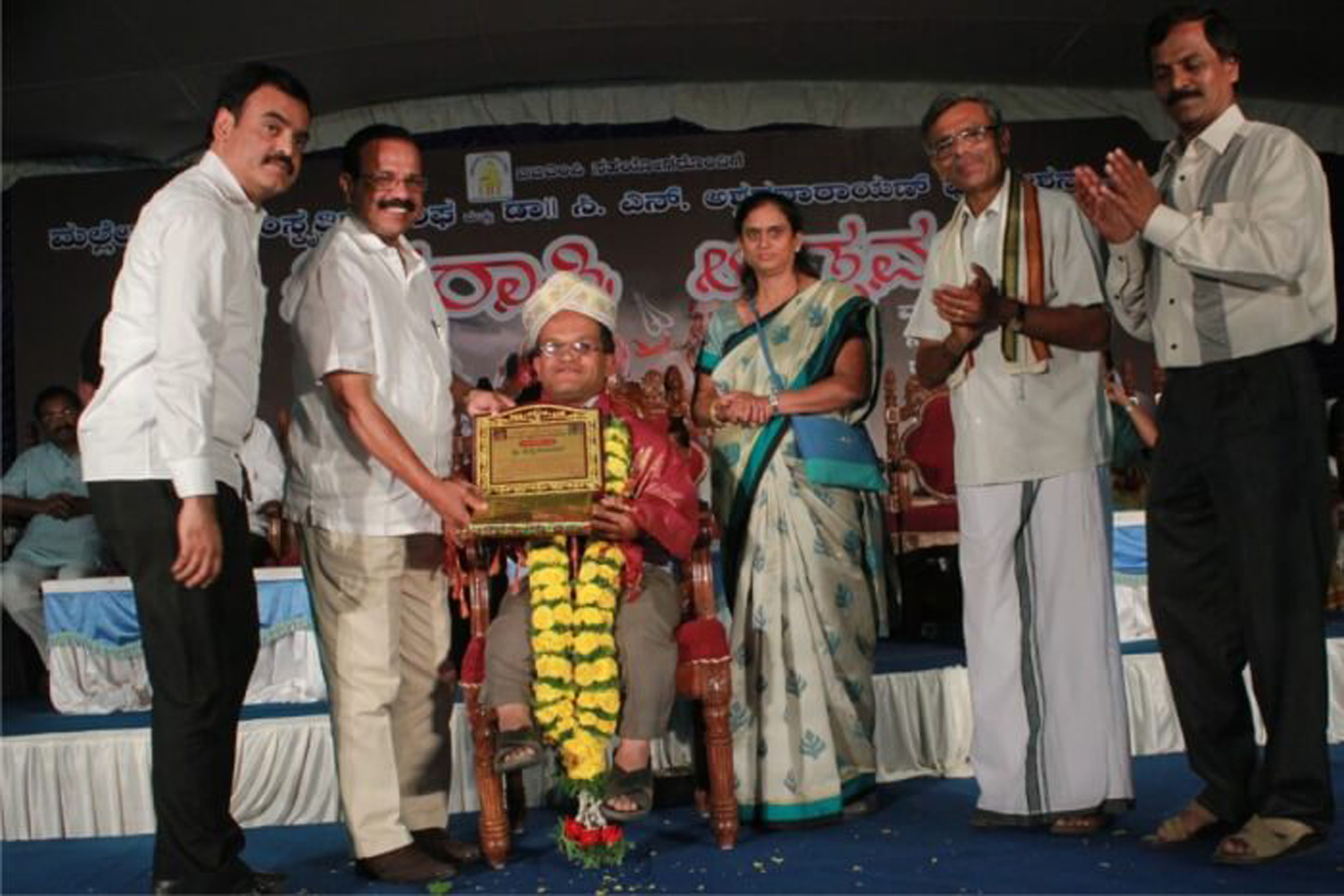 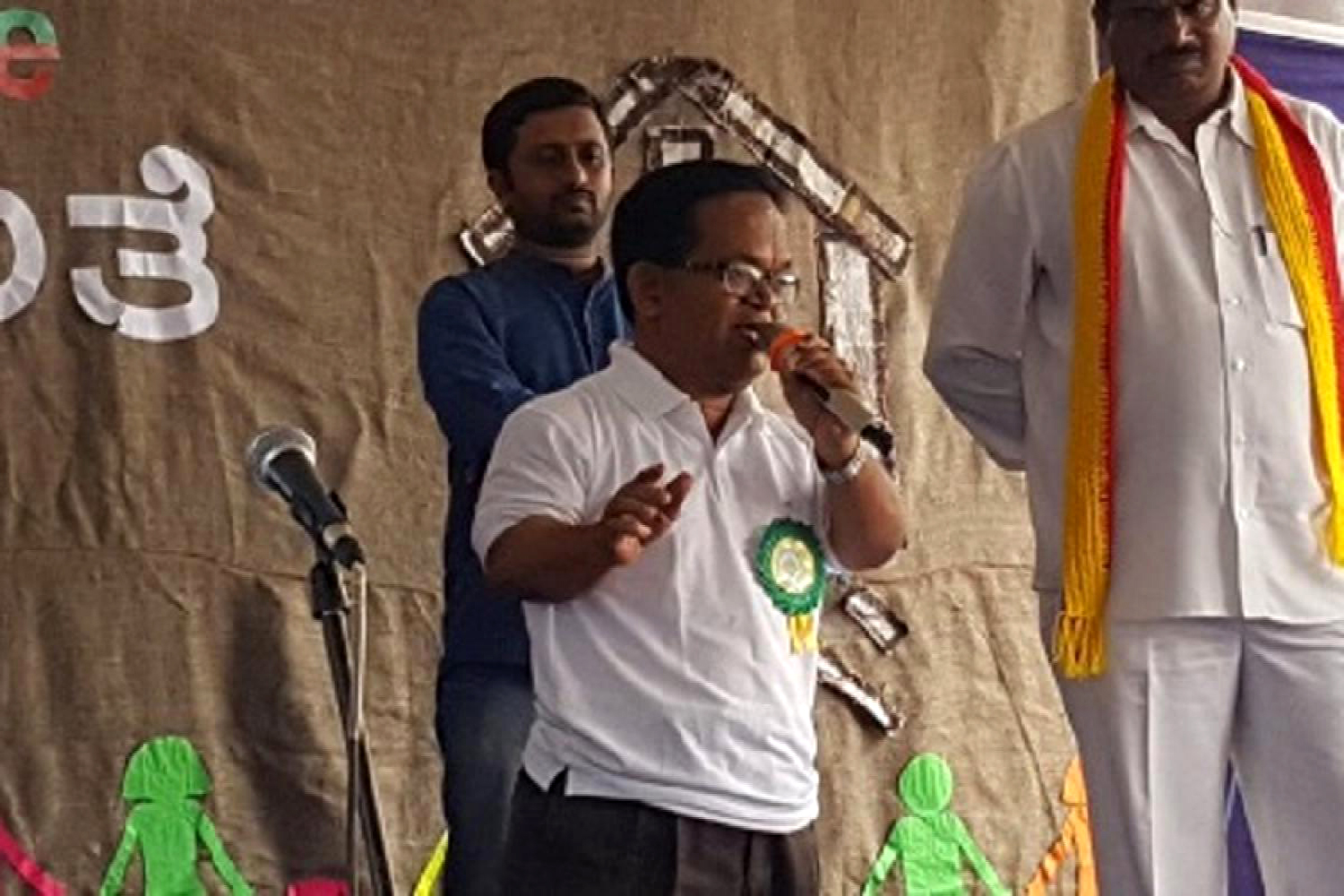